I’ve been busier and more unavailable than usual and here is why: I’m racing the Arizona Trail 750 – A self-supported, 750-mile, mostly single-track mountain bike race from Mexico to Utah. It starts next Friday, April 15th.  The story is below! 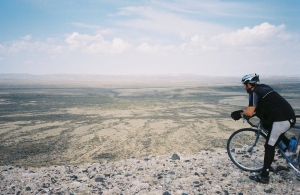 Chillin in the Great Basin on my 2006 bike tour of the Great Divide mountain bike route.

There are some things about me that are obvious:  It takes me a really long time to make decisions, I’m stubborn as hell, let’s see here, what else, oh I love pancakes and I’m always looking for new adventures. Last year I was convinced my new adventure was 24 hour mountain bike races. My logic was sound:

I love mountain biking.
I love riding for a really long time.

Here’s what I didn’t realize: I hate riding in circles. Last year at the Cool 24 hour I wasn’t that stoked. It got old. It probably didn’t help that it was cold and wet. So easy to get in your sleeping bag when you pass it every hour or so! The motivation to push on and do more laps wanes quickly. Later in 2010 at the Boggs 24 hour race, even though I ended up in 2nd place single-speed, I was having more fun, but still, well, I hate to say this, I was bored. Bored of going in circles.

Setting up my own support station at last year's 24 hours of Boggs. This is 10 minutes before race time!

So what else is there?

Imagine an awesome combination of bike touring and mountain biking. You and only yourself and your survival gear getting from point A to point B- on remote, off-road trails. It’s called Bike Packing: extended off-road travel by bike; like hiking, but faster and more fun.  Exactly what I did in 2006 on the Great Divide Mountain Route with my close friend Steevo (see his photos). That was one of the best trips of my life. We rode cross bikes and even though we weren’t racing, hustled to cover 90-100 miles a day. We camped every night but two: one when we met a girl who invited us over for dinner and once when I was so sick I couldn’t stand up.

Now imagine the same situation, but a race. No entry fee, no support, just getting from A to B as fast as possible. The most famous of this unique style of racing is on the Great Divide route- The Tour Divide race. It’s famous enough to have a film and an estimated 100 people lining up at the start this June. And I may be one of them.

But that is not until June. What I’m preparing for is next week’s Arizona Trail Race– 750 miles of mostly single-track from Mexico to Utah. For years the race was ‘only’ 300 miles because not enough of the Arizona Trail was complete. Last year the organizer offered the full 750-mile version and two people finished, the fastest in 7 days.

How is this race different from the Tour Divide? The rules of self-support are nearly identical- see Tour Divide rules and Arizona Trail Race rules– but the Great Divide route has less than 1% single track, about 250 miles. Even though the AZT is a quarter of the distance it has at least twice the single track. That means more technical riding- both up and down. The biggest limitation of this race? Crossing the Grand Canyon. See, National Parks do not allow bikes to be ridden off-road. The Arizona Trail goes in, across, and back up the canyon on the north side. Racers must dismantle their bikes and carry them on their back for the 24-mile hike. Seriously? Yes.

Unsurprisingly I’m freaking out. I’m not silly/tough enough to ride this single-speed so I’m building a 1×10 29er.  Yep, a new bike. But not just a new bike. All sorts of new gear that is specific to this kind of adventure: rack-less bag system, tubeless tires, GPS, dynamo hub lights. My friend Errin is preparing for the Tour Divide and he’s already riding his fully-loaded bike to work every day. I’m less than a week from starting this race and I’ve got a ways to go! The ever productive and helpful Chris Chueng is making me a few bags.  Famous vegan track racer Jack Lindquist built my wheels, Megan from Moth Attack helped me with the components, Errin Vasquez is helping me with both gear (he showed me this 7 ounce bivy sac, which I bought!) and GPS, Golden Saddle Cyclery is doing some wrenching…I haven’t pedaled a mile of the race and already so many folks have helped me.

I hope to get more details up through next week, before we leave. For now you can read about the route and check out the site for tracking the race (I’ll be wearing a SPOT device).

Meanwhile I’ll be studying maps, gpx files and bikepacking.net to minimize my biggest fears: getting lost and running out of water. And reading more super motivating articles about being outside on mountain trails like this great piece by ultra-runner Anton Krupicka.

Have a great weekend, and maybe I’ll see you at Feel My Legs, I’m a Racer?