Yo social weekend here in Los Angeles! Friday was Park[ing] Day, a day-long event where communities transform parking spaces into parks. It’s brilliant because of all the problems of automobile dependency, often overlooked is the amount of space it requires to not only move them, but to park them. In Los Angeles the bike community is especially involved, which included a 40-mile bike tour of the parks with the editor from LA Streetsblog. Photos, including the one below, stats and reports here. Dan Koeppel also covered a Dept of DIY Park[ing] Day event.

I spent the day using the ‘parks’ as meeting spots with friends between work and other obligations. In Heliotrope Village the neighborhood council took over 5 spots and had a dj and a swimming pool. That evening I met up with some friends at Echo Park where the Echo Park Film Center was screening Les Triplettes de Belleville.

Saturday, this was worth my time:

A 3-lap race in Griffith Park, up and down climbs I’ve done hundreds of times, only 2 miles from my house. How could I not? I rolled over with my housemate and of the 50 people hanging about, I knew two: the organizer and his sister. Is old man status fully achieved? 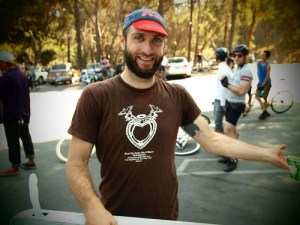 Had to represent Feel My Legs (photo from Kelly’s Flckr)
It was fixed gear only so it definitely attracted a lot of the LAfixed.com crowd, but I was surprised at the half dozen or so kids in kits.

40+ of us did a rolling start through the parking lot before hitting the top section of the two-mile climb up Fern Dell Dr/Western Canyon. There was some talk re gearing on the message board the week before and kids were talking running 47-16…..which seems way too big for me for the city, let alone a hill race. I palped my city gearing: 44×16 which worked well. Of course, I was totally spun out down Vermont Canyon, but wasn’t everyone?

Anyway, there was this guy way off in front that I just couldn’t catch. Sean did a terrific job organizing this, but in his excitement he (and everyone hanging out at the start/finish apparently) lost count of our laps. So the two of us went out for a fourth lap before they figured out how to count. Hilarious. Ends up the dude who beat me is a Cat-1 roadie. Equally hilarious. At least he rode his bike to the race, unlike a bunch of the racers (only in LA people would drive to an alleycat?).

Sean hooked up an after party and I got so many prizes I couldn’t carry them home. Gave lots of stuff away, but not the front light, which I happened to need. Score! Thanks to everyone who helped make this happen and who braved a tough climb three (or four) times.