Conquer the Canyons stage 3 and results

Bike racing lesson 1: At the top of a big climb, if there is a 15 foot gap between you and the lead pack, close it. No matter what.
I watched ten riders turn those 15 feet into a half mile and then never saw them again.
lesson 2: Getting the people you are racing ‘against’ to work with you to chase the front group is nearly impossible.
lesson 3: When riding as fast as you can everything you ever knew about anything is useless. For me anyway. My only thoughts were: ‘Keep pedaling!’ and ‘Don’t let that sketchy guy near your front wheel!’

The course is three loops, each one 7.3 miles with a one mile climb, a 45 MPH descent and some rollers. Barely a flat section. The Cat-IV’s started 3 minutes before our group of 50. Jack and Brian held on to the main pack on the first climb; Brian finished 5th and Jack fell off just before the finish and was 18 seconds off. Our ‘chase’ group was about 12 riders after one lap, then 6 on the last. I felt pretty strong and broke away both times on the big climb, but with no one to ride with they easily caught me on the descent. Both times I caught some Cat-IV’s, but since they are in a different race, you can’t ride with them. Sucks. To non-riders it is difficult to explain just how important being in a group is.
Anyway, our pack finished the road race 3 minutes off of the front group. The General Classification after all 3 stages was Brian 6th, Jack 7th and myself 15th. Not bad. I want to say that this Cat-V was more competitive than most because of the separate ‘beginner’ Cat-V races, but what do I know? The rain held off for the ride home; almost the whole day was overcast and chilly. I ended up with 93 miles for the day. If you count my ride to the unnamed corporate coffee chain for my ‘free if you bring your own mug on Earth Day’ coffee later in the day I did a century. 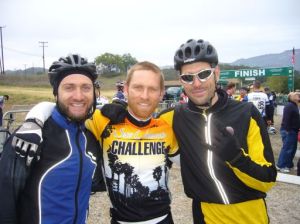 One more thing. Before the circuit race on Saturday, when I was warming up I rolled past the kids chillin near the BMX demo and one kid had an East Coast Destruction cap on. WTF? ECD are the BMX kids I grew up around and it was obscure back then…to see it now, out here, is crazy. We chatted a bit, knew some of the same people, etc and I told him I grew up riding Posh trails in Bethlehem, PA. I showed him my DIG tattoo so that he’d know, despite the spandex, I’m still down. ha ha. Makes me miss those days of riding BMX trails.

One response to “Conquer the Canyons stage 3 and results”